Avoiding 16 Psychological Biases That Could Kill Your Business - Pocket Risk

07 Oct Avoiding 16 Psychological Biases That Could Kill Your Business 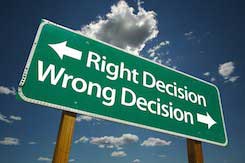 You’ve probably read about some of the psychological biases that impact investment decisions every day and shake your head. Whether it is the herd mentality that causes investors to sell low and buy high or the inability for people to cut their losers. The human mind is so self-manipulating and malleable that it can be impossible to come to any reasoned decision.

But have you taken the time to think how these biases impact the decisions you make in your business?

Take some advice from Charlie Munger who has developed a psychological checklist for making major company decisions. We’ve adapted them to the financial advisory community so you don’t make one of these common mistakes.

Print these out and start making better decisions today.

1.  Reward and Punishment Bias – Probably the most powerful bias of all. People are often biased towards what is in their best interest. At times you may find your interest conflicting with a client. Have you ever thought your interest was the best for everyone involved? Maybe this was because it was in your interest. Think about it.

2.  Liking/Disliking Bias – People are likely to favour those they like. The result being you only see good in their actions and dismiss their faults. For example you might like a particular equity research analyst and as a result accept her ideas without proper due diligence.

3. Doubt Avoidance Bias – People like to quickly dismiss doubt and make a decision. Doubt paralyzes action and has a heavy cognitive load. Hence people like to avoid situations where there can be doubt. Have you recently made a quick decision because you couldn’t live with the doubt?

4.  Inconsistency Avoidance Bias – A person’s desire to avoid inconsistency with what they have already decided, agreed or believe makes them continue living with a bad decision. It just takes too much energy to change. So they are biased against any inconsistencies. Perhaps you hired someone who hasn’t performed well but you don’t want to admit everything you thought about why he was a good hire was wrong.

5.  Fairness/Reciprocation Tendency – A desire in people to do what is fair and reciprocate good and bad behavior. For example if someone pays your business a compliment you are more likely hear their sales pitch even if you have absolutely no interest in what they are saying. This is a waste of your time and their time.

6.  Envy/Jealousy Tendency – People are generally envious of those (who are close) to them and have more of what they want. This leads to making decisions that are not in their best interest. For example, a competitor may have a brand new fancy office but do you need one? A client may want to copy their friends and move to a 80/20 equity allocation when 60/40 is more appropriate do you allow them?

7.  Influence From Mere Association Tendency – Did you read this article because I associated myself with Charlie Munger in the early paragraphs? Have you recently chosen an investment product, service or tool because it had some sort of celebrity endorsement? That is influence from mere association. That alone does not tell you anything useful about what you are about invest your time in or purchase.

8. Pain Avoiding Psychological Denial – A common bias employed by entrepreneurs. The truth is too painful so you distort reality to make it bearable. A classic example is blaming the client instead of yourself for anything that goes wrong.

9. Deprival Tendency – You’ve probably experienced this with clients. The pain of loosing 10% is higher than the joy of winning it. Being deprived something you already have is more painful than what you gain.

10. Social Proof – People value things higher because others admire it. This cuts across everything from investments, to cars, to houses, to clothes etc.

11. Contrast Bias – Something or someone looks better or worse because of a contrast next to another item. For example a $499 item looks cheap next to a $1,499 item but expensive next to a $9 item. The value may be completely unrelated to the price.

12. Stress Bias – When people are stressed e.g. under time pressure they can often act in extreme ways. For example limited time offers (e.g. buying into an IPO) can lead to making decisions they would normally never make.

13. Availability Bias – People are biased towards what is easily available (physically and mentally) because to think or do something else is too much work/stress. For example investors often choose financial products they know because the time and effort to do research into other areas is deemed too taxing.

14.  Senescence Tendency – Biologically speaking it becomes difficult to learn new things as you enter old age. This can bias decision making towards what is already known and understood.

15.  Authority Tendency – Tendency to believe and follow those deemed as authorities in a certain area. Each person’s work should be evaluated on a case-by-case basis.  For example many people believe in the efficient market hypothesis because its main proponent won a Nobel prize. This alone should be an insufficient measure of whether the Efficient Market Hypothesis is a good investment theory.

16.  Reason Respecting Tendency – People tend to accept certain paths because a reason is given, even if that reason is unfounded. For example a client may say he wants to invest in fine art because he believes the market is going up. That may be true but you don’t accept this course of action simply because he has a reason.

That’s it. Sixteen psychological biases to avoid when making decisions in your firm. Print these out and take a look whenever you are making major business decisions.

Posted at 07:26h in Advisor Resources, Lists by admin